Dara O Briain’s Go 8 Bit is a British comedy panel game show originally created by English comedians Steve McNeil and Sam Pamphilon during the Edinburgh Festival Fringe in 2013, and then transferred to television on Dave beginning on 5 September 2016. The TV series stars comedian Dara Ó Briain as host, with McNeil and Pamphilon as team captains, and video game journalist Ellie Gibson as the resident expert. The show involves McNeil and Pamphilon and their team mates playing a series of five video games against each other.

The series began as a show at the 2013 Edinburgh Festival Fringe entitled McNeil & Pamphilon Go 8-Bit!, in which teams led by the duo played video games against each other, with the loser having to take a forfeit.[2] Examples of forfeits include McNeil being punched and Pamphilon eating a whole jar of jalapeño peppers.[3][4] The show was also performed at the Fringe the following year.[5] The duo then worked with TV producer Rohan Acharya to develop the format, with a television pilot being developed in 2014. Gibson became involved with the show after seeing a live performance in a London pub, and auditioned for the role of the gaming expert.[6]

In an interview with The Guardian McNeil said that they created the show for the Fringe because they could not think of anything else to put on, saying: “We’d had the idea of doing a late night show on Friday and Saturday nights, just for fun, where we’d get comedians drunk and then encourage them to abuse each other while they played retro games – purely for shenanigans. Somewhat tediously, it was more successful than anything else we’d done up to that point. So we kept doing it.”

The shows consists of video game lover McNeil and “gaming muggle” Pamphilon taking each other on in a series of games along with a guest team mate. Ó Briain acts as the main host while Gibson provides information about each game.

There are five rounds played:

A classic video game, played by all four players.
The favourite games of the two guests, with the guest playing against the opposing team captain.
A modern big hit game.
A humorous take on a more unusual game.
The points on offer are decided by audience vote. The audience vote for who they think will win each game, and the higher percentage is the number of points on offer – e.g., if McNeil’s team won 60% of the vote and Pamphilon’s team 40%, then 60 points are on offer to the winner. In the final round, the points are doubled. The games begin with the studio set rotating clockwise so the players face the TV screen, with Ó Briain counting down: “3, 2, 1, let’s go 8 bit!” 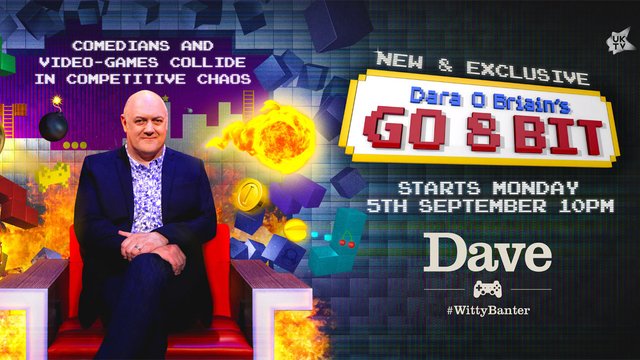